Thermal Cameras & The Hunt For Ghosts

It's widely believed by many paranormal activity hunters that thermal cameras, known for their high temperature sensing capabilities, can be used to detect the presence of those from the afterlife. But is this nonsense, or is there some sense behind the theory?

The first question you need to ask is how exactly does a thermal imaging camera work? These devices use a combination of complex algorithms, a specially-constructed thermal lens and highly sensitive equipment to detect changes in infrared light around us, and these changes are represented as a thermal image on the camera itself. Infrared light is part of the light spectrum, but is is completely invisible to human eyes. It's responsible for heating up objects and animals give off extensive IR radiation and when objects are looked at through a thermal camera this IR distribution is represented as an image like this one:

Here you can see how the heat of a warm mug of tea differs from the coaster and desk it was placed upon. The handle, which is designed not to be as hot as the main body of the mug, is shown as colder and gives off a purple colouring, while the main body of the mug itself is bright and vivid, which indicates the presence of a large amount of heat or thermal radiation.

When used in paranormal investigations, thermal cameras are often used because investigators believe that the camera can be used to pick up mysterious cold spots or hot spots that have no discernible explanation. Depending upon the sensitivity, these changes are much more easy to spot and, several outlets - including TAPS, who take part in the Ghost Hunters programme on the SyFy channel - use and believe in the thermal imaging camera as a means for detecting ghosts and paranormal activity.

Since thermal cameras really are such expensive equipment, they're probably not viable for the amateur ghost-hunter. That said, not knowing exactly how temperature differences might take place is another reason why thermal images can often be mistaken for paranormal activity, as several aspects can have an effect on what a thermal camera sees. The added tension of moving through a dark, supposedly-haunted house also changes the human brain's perception, perhaps making users believe they have seen something when, in reality, they have not.

TAPS actually claims to have seen and captured a real image of a ghost on a locker using a thermal camera, but is this really a ghost, or is it simply the reflection of one of the crew in the locker? IR light bounces off surfaces, so it's highly possible it's the latter. Take a look for yourself: 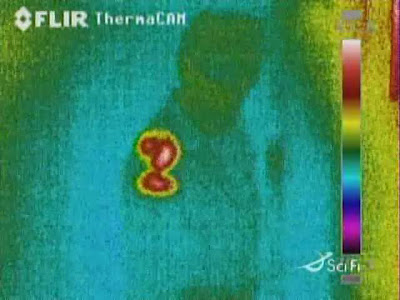 I'm a little sceptical that this is the real deal. Having been around thermal imaging cameras for an extended period of time, and seeing the effects bouncing IR radiation can have on a surface that the camera is pointed at, it's extremely hard to believe this isn't merely a reflection of one of the ghost hunters.

Is it a ghost paying me a visit and lingering beside my desk as I work (scary stuff...)? Nope, it's me, reflected in the window of the monitor. The shiny metallic surface of the locker in question investigated by TAPS would produce similar effects to the image here, even in the dark where the image was originally taken (in fact, the low light is the reason the image isn't as high in quality).

You'd also be surprised by the amount of things that can give off thermal radiation (both cold and hot) as well. Many anomalies detected using thermal imaging systems can directly be caused by such things as cold/hot water in pipes behind walls, breakdowns in building insulation causing draft and even tiny particles of matter giving off thermal signatures (often thought of as Orbs in ghost hunting circles). As such, hunting spirits with a thermal camera is a dubious activity, and while it's impossible to prove either way whether it works or not, the scientific evidence behind the camera's technology and our environment would suggest that the thermal camera is an inaccurate tool for ghost hunting purposes.